Writing about the Atacama skeleton that has been thought could be alien or a hybrid alien, the pyramids of the Middle-East and Americas and the debate about whether Europeans known as Solutreans crossed the Atlantic during an Ice Age 20,000 years ago on my fmpoetry.wordpress.com blog recently reminded me of watching Simon Schama provide a good ancient art summary in the first episode of the new Civilisations series, and I thought it was more suited to this blog, as it involves time and travel.

The Earth (Wikipedia link) is supposed to have formed 4.5 billion years ago, and life started in the first billion years. Evidence of human culture starts about 100,000 years ago in Africa.

About 77,000 years ago ochre diamond patterns are the first known art.

There is evidence from 37,000 years ago in French and Spanish caves of hand outlines and animal images. The latter showed they had the ability to represent and create with planning from memory. That is the same area the Solutreans inhabited 20,000 years later (to give an idea of timescale, historic Britain started 1000 years ago really).

With relevance to my previous thoughts about the Middle-Eastern and American pyramids and how they are so similar, those types of cave art travelled to the east and west, with evidence found in Indonesia and Argentina.
Legendary Spanish artist Pablo Picasso thought that Paleolithic art was never bettered, and he created many similar pictures, especially bulls.

From around that time in Germany, the first known statue was created, and it has a special interest to me and my decade-long greenYgrey concept: a werelion, head of a lion on the body of a human.

The first known human figures were found from the same culture; fertility statues that  Schama considered to be the start of paganism. 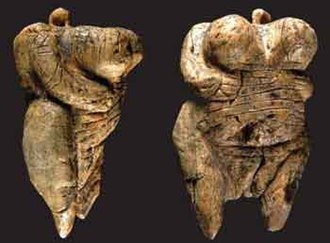 Bringing it back to Mesopotamia, Schama featured an intricate statue of a ram amongst vegetation from their civilisation about 4,500 years old; over 70,000 years after the first art that still survives and has been discovered!