On my first journey around Europe in 1987/88 I visited some of the biggest tourist sites, such as the Eiffel Tower in Paris, Colisseum in Rome and Acropolis in Athens. It’s a tradition I kept up on my 25th anniversary tour, visiting Mont Saint Michel near Saint Malo; the Naeroyfjord near Bergen; Gamla Stan in Stockholm and the Nou Camp in Barcelona (should probably have been La Sagrada Familiar, but did visit other Gaudi sites!).

In Latvia last year I visited Turaida Museum in the Gauja Valley, a day-trip from Riga to Sigulda; the Open-Air museum on the edge of Tallinn in Estonia and Suomenlinna fort guarding Helsinki’s harbour in Finland.

Jersey has some very impressive castles, such as Elizabeth, guarding Saint Helier harbour…

… and Gorey (Mont Orgueil) on the east coast…

… as well as several interesting museums, but when I found out about the 6,000 years old Neolithic burial chamber of La Hougue Bie it was the place for me to be.

The original Neolithic burial chamber, with the entrance positioned facing east so sunrise reached the back wall on the equinoxes, had a mound built over it originally, making it look very greenygrey (remembering my decade-old Blighty dominant landscape concept): 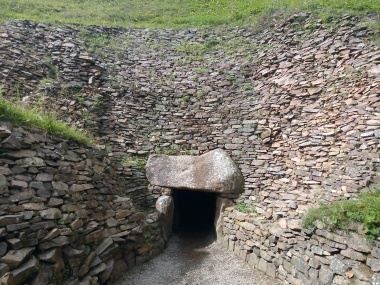 In Medieval times a church was built on top, adding another layer of grey; and it’s greenYgrey inside too!:

I entered the burial chamber three times, without intending to originally. The first time was to have a look; the second was after remembering the torch on my phone to light it up better, and the third after I’d visited the museum and found out more about it. The first photo here is looking inside, and the second out: 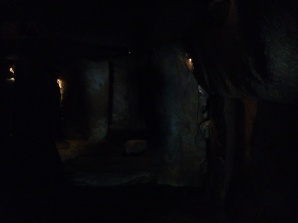 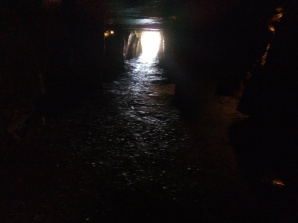 You may be wondering if I felt a connection to the ancestors? I don’t know really, maybe I did, or maybe it was just me wanting to, creating it more in my mind.

Making the Most of Life: Life is for the Living

I think I’ve felt more of a connection to the living creatures I’ve met the last year, decade and life. I felt more of a ‘magical connection’ this week, with an unplanned stop in the last place of sunshine before returning to ‘civilisaton’, at first just planning to get ten more minutes of hot sunshine for a Vitamin D boost, storing it up for the coming autumn.

Staring for a few minutes into lush vegetation, a tree I’ve probably passed hundreds or thousands of times began to take shape in my mind. A few trees away, two squirrels ran around the trunk, looking as if they were playing; making the most of the morning sunshine. Then water fell from one branch, looking like a waterfall; and big flying insects landing on leaves reminded me of the Avatar movie.

Standing there, with a bag of blackberries in one hand, and my t-shirt covering my front in the other (sun on my back), I knew I must have looked odd to any ‘normal’ people who saw me; but later thought I may have also resembled the Statue of Liberty (in a pagan kind of greenYgrey way!):