It seems I owe Amber Heard an apology, as cool electric car man Elon Musk has nicely and intelligently said that it was mostly Amber Heard that had broken off their relationship; not him because she had been manipulative, as reported in the media when they split. Amber has thus gone green in AAW (Adult Angelic Waifs). Maybe her problem is that she has dated richer men, and needs a poorer one?

While I recently said I preferred pink to red in light (pun intended) of twilight colours; it was also reported today on MSN News that it’s Princess Kate (British royal family reality and greenYgrey world fantasy) and her daughter Charlotte’s favourite colour; red is a great colour for women’s fashion.

Rachel Riley looked ravishing in red last night, and at a charity do too, although the venue has hellish connotations if you believe in monotheism, which I don’t of course, with their traditional red kit representing Manchester United’s nickname of the Red Devils. I believe Rachel Riley is angelic enough to ward off any evil spirits!

I was listening to The Scorpions In Trance album on YouTube as I read the above stories on MSN this morning funnily enough, reminding me that I’d read a Scorpions article on Classic Rock that provides an update to their controversial album covers story that I featured in XaW Files: Beyond Humanity.

‘As the owner of said guitar, Roth subsequently expressed his shame at the photograph – though Schenker says it was Roth who actually suggested it.
“It was his idea,” says an unrepentant Schenker. “It was a great sleeve for us. It’s sexy, it’s mystical and above all it’s not brutal.”’

The greenYgrey of In Trance

Moreover, Schenker’s In Trance song meaning also sounds like my time writing the greenYgrey, and becoming a Nietzsche superman, Buddhist enlightened: “It’s about trying to get into the middle of life – not the extreme left or right,” he explains. “You can get stuck in a rut, doing things you don’t like, over and over again. It had to do with drinking, maybe.”

I still love drinking, and especially golden ales, which doesn’t have anything to do with my taste in women; that’s just a coincidence. The woman on the In Trance cover is also a classic rock model of an AAW: one that will always keep me in trance… although I had to escape that music scene… back to the safety of classic rock!

The In Trance of greenYgrey 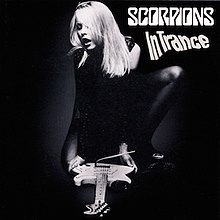 While I clarified before that the celebrities are the ones I meant and referred to in my greenYgrey writing there was a Rachel Rachel Riley lookalike, and Elle McPherson soundalike waify version from my time in trance; as well as a Kate or two from my previous pre-uni life, when there was a woman who could have been an inspiration for my lucid dreaming, but wasn’t; and one who ran and ate healthy long before me.

I write the above in warm thanks, hoping to please them if they read it. I don’t expect anything in return, and clarified that it was the celebrities in question because I didn’t want other women seeking AAW status, and being disappointed if I didn’t give it. It became a pressure and anxiety that affected me, and I’m not that socially comfortable anyway.

AAW will aawlways live on, as it has been written, and hopefully there will be many more generations of women who like to look good, and that will have the freedom to do so. I’m getting a bit old to be appreciating it in public now, so please don’t expect the extra-aaw-dinary… except in my writing!

If feminists think I’m being exploitative, well, here’s a topless one of me from Oz in 1989:

I didn’t take any photos in Spain or collect any memorabilia, apart from a couple of pesetas; I probably would have in Barcelona, but as my diary extracts show, my lift took me straight past it. I kept a coin or two; or note if that’s all there was, as in some countries; from each country. Here’s a photo of the two peseta coins I kept:

As my diary extracts show, hitch-hiking in northern Spain (Basque region) was difficult, but the lifts were eventful when they happened. Some Germans lifted my mood playing the Scorpions, and a local put AC/DC on.

The German ‘Scorpions’ lift, walking above Zaragoza and arriving in Figueres (I found out while there it was Salvador Dali’s birthplace: the museum was closed as it was a Saturday!) all made it into my fantasy fiction travel around Europe to Google Maps original concept XaW Files: Beyond Humanity book; cross-referencing through time and writing genres, via the motorways and crossroads of my mind; neurons of memory and creativity perhaps travelling from different parts of my brain, and meeting at the greenYgreyesque corpus callosum.

The Zaragoza to Figueres lift started off a spaghetti western storyline in Chapter 6 Episode 18: ‘I had felt shimmering significance in Figueres, time distortion in Barcelona and at a crossroads in Zaragoza.’ I had made it to Barcelona in 2013.

The German Scorpions lift was referenced in a fantasy storyline with the real Scorpions singer Klaus Meine, twisting it around to him having read my memoir, which is of course separate to the greenYgrey trilogy: ‘Klaus was very understanding about it, and gave me a lift to Hannover, his home town, which was on my way west. He played the Scorpions’ Worldwide Live album on the way, which is one of my all-time favourites. I told him I’d referenced a couple of Scorpions songs in the opening paragraph, and he said that was a coincidence, because our drive reminded him of one in The Guns N’ Roses Worker Traveller.’

Here’s my diary recording my brief time in Spain. I had intended spending longer, but as I write in the diary, the hitching wasn’t very good.

In 2005, after a decade in further education I became Dr. Marc Latham, the Chav Philosopher; possibly Blighty’s best value and poorest doctor of philosophy. My memoir, poetry and fiction books are available on Amazon: https://www.amazon.co.uk/Marc-Latham/e/B004SP40J0/