I’m old enough to remember when Denmark shocked the football world in 1992 to win the European Championships after only qualifying because Yugoslavia was at war, and couldn’t take part. I visited Copenhagen in 1995, travelling down to the Viking Museum in Roskilde, staying with a traveller I’d met in Rio de Janeiro. I also spent a comfortable (almost hygge: trendy Danish concept for cosy; adding a little parody comedy to my Scandi sychophancy!) night in beautiful Copenhagen airport returning from heavenly Helsinki last year. I’ll try and bring you some Danish dynamite photos soon.

Denmark was of course the setting for Beowulf, with the protagonist joining the greenYgrey ramblers there into Sweden, but not as far as Iceland; those three Scandinavian countries have now qualified for the 2018 World Cup.

To celebrate Denmark qualifying for the World Cup here’s some football photos from Rio of Copacabana Beach, where I played just after Brazil won the 1994 World Cup, and the Maracanã Stadium; followed by a Danish episode of XaW Files: Beyond Humanity:

This episode sees part of the greenYgrey protagonist reunited with anagram star Love the mixed-up vole’s one-parent offspring, supporting such parents, without recommending it, and a classic story from Beowulf of him fighting a dragon adapted to modern Copenhagen through a theme park rollercoaster story. 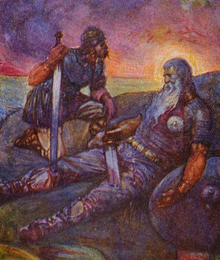 ‘Gee, it’s great to see you again, Lovus and Lovulus, and you too g,’ I said.

Back together as greenY, we democratically elected to tell that story from the point of view of my reenY rather than my g. In fact, it was a unanimous decision, as my g liked the way my reenY had followed the voles by throwing in a Gee at the start of their reunion exclamation; I used the plural their before reunion counting reenY as five separate letters rather than one word.

I was just about to ask Lovus and Lovulus where they’d been, when there was an almighty sound of crashing and banging behind me. I looked around, and could hardly believe my eyes.

The Bjergbanen and Dæmonen rollercoasters were locked in a titanic tussle, wrapped around each other like a boa and python fighting to the death. I looked at the others, wondering what was going on. Chris looked as puzzled as me, and Be was still nowhere to be seen. Lovus and Lovulus had taken cover under the Waltzers.

The younger and more powerful Dæmonen looked to be getting on top, but then the Bjergbanen seemed to use its age and experience with a loop the loop move, locking its nightmarish nemesis in a hold that proved to be the deciding blow in a short but scintillating scrap.

After regrouping, I finally asked Lovus and Lovulus what they’d been doing since we parted, way back in Wurzburg. They told me they and their mother surfaced in Hamburg, and made their way north to Copenhagen. They felt right at home when they reached Tivoli.

After a day or three, Love had wanted to ramble, but they weren’t ready to leave. Love had seen they were so happy amongst all the fun exciting rides that she’d agreed to let them stay when they asked.

I was about to say it was a lovely heartwarming story when I thought I heard Chris welcoming Be behind me.

I turned around and saw it was Be, although there was something about him that looked a little different. Maybe it was because he looked like a bear.

‘Hi guys,’ said Be. ‘I know you’ll understand greenY, being a chameleon werewolf who changes appearance a lot; and I think you should do too Chris, being a naturalist who knows a thing or two about metamorphosis. I have now shapeshifted into my Swedish version of Bodvar Biarke for our journey into my Geatland home. My father was a bear, so you could call me a werebear. It wasn’t a straight shapeshift this time though, for I was the Bjergbanen fighting the Dæmonen, as my Beowulf character has to tussle with a dragon foe after Grendel and his mother. Now, my story is up to date, and I can take you to the great Geatland in peace.’

‘Thank you Bo,’ I said. ‘You still look like the same berserker to me. Welcome back into the fold, and please let me introduce you to a couple of my vole companions, Lovus and Lovulus.’

The new acquaintances got on like a Viking funeral longship on fire. I loved seeing the young voles all confident and grown up, but that did make me miss their mother even more. I also liked Bo’s new look, and related to him even more as a werebear. He had seemed like a monotheist before, but a nice one, like the Mildly Monotheist Moby in Oz.

Thinking about it, Moby’s two middle letters spelt backwards are bo, which corresponds with Beowulf’s new old abbreviated identity. As Oz is upside down to this world, maybe they are mirror characters.

Moreover, if you combine the first two letters of the voles’ names with Bo it spells lobo, which is Spanish for wolf, and a commonly used word in the English language too.

The classic version of Beowulf and Grendel was written by Christians in the eighth century, but it was set in fifth-century Scandinavia, and influenced by folklore of that place and time.
Wikipedia: The standard view is that, if Beowulf himself has a ‘cognate’ character in Rolf Kraki’s story, it is Bödvar Bjarki (Bodvar Biarke), who also has a younger companion, Hjalti (Hialte) – perhaps matching the Beowulf character Wiglaf. Beowulf comes from Geatland (= Götaland) and one of Bödvar Bjarki’s elder brothers, Thorir, becomes a king of Götaland. Moreover, like Beowulf, Bödvar Bjarki arrives in Denmark from Götaland (Geatland), and upon arriving in Denmark he kills a beast that has been ravaging the Danish court for two years. The monster in Hrólf Kraki’s saga, however, is quite unlike the Grendel of Beowulf; but it does have characteristics of a more typical dragon, a creature which appears later in Beowulf. Just as Beowulf and Wiglaf slay a dragon at the end of Beowulf, Bödvar Bjarki and Hjalti help each other slay the creature in Denmark.
Proponents of this theory[who?] argue that both the names Beowulf (lit. “bee-wolf”, a kenning for “bear”) and Bjarki are associated with bears. Bodvar Bjarki is constantly associated with bears, his father actually being one.
In some of the Hrólf Kraki material, Bödvar Bjarki aids Adils in defeating Adils’ uncle Áli, in the Battle on the Ice of Lake Vänern. In Beowulf, the hero Beowulf aids Eadgils in Eadgils’ war against Onela. As far as this Swedish adventure is concerned, Beowulf and Bödvar Bjarki are one and the same. This match supports the hypothesis that the adventure with the dragon is also originally derived from the same story.
Hrólfr Kraki, Hroðulf, Rolfo, Roluo, Rolf Krage (early 6th century[1]) was a legendary Danish king who appears in both Anglo-Saxon and Scandinavian tradition. His name would in his own language (Proto-Norse) have been *Hrōþiwulfaz[2] (famous wolf).
https://en.wikipedia.org/wiki/Hr%C3%B3lfr_Kraki